Baker Municipal Airport is a public use airport located one mile southeast of the City of Baker, a rural community in Fallon County, Montana. The airport’s primary purpose is to link the remote community to larger cities in the region, accommodate extensive corporate aviation activity related to the area’s oil and gas industry, and provide a vital link for air ambulance services in southeastern Montana.

The Baker Municipal Airport is utilized by a variety of commercial and general aviation aircraft including agricultural, air ambulance service and airborne pipeline reconnaissance. The airport’s 4,900-foot runway length had restricted aircraft’s total takeoff weight, forcing the larger corporate aircrafts to depart with minimal fuel and land at an intermediate location to fully fuel prior to reaching their final destination. Therefore, Baker Municipal Airport owners, City of Baker, and Fallon County commissioned KLJ to construct a plan to allow for increased jet traffic and fully utilize the airport. The project involved extending the runway and parallel taxiway by 1,000 feet, overlaying the existing runway, grooving the runway to improve friction, replacing the airport lighting system and installing new PAPIS and REILS. The project was completed in two phases at a total project cost of $5.28 million.

One unique aspect of the project was the installation of a completely new LED runway and taxiway lighting system. Full LED lighting implementation on the airport had not previously been completed in Montana and has only been implemented in a handful of airports in the country with the first full installation in late 2011. The project was completed on time and within budget limits, achieving substantial completion in early October 2012.

KLJ developed a three-year plan which included lengthening the existing runway and parallel taxiway, increasing pavement strength with a structural overlay and replacing an aging lighting system with LED technology. LED installation was a challenging project component to include due to increased initial cost and its recent availability for use on airfields. The cost increase and implementation of unfamiliar systems caused many to overlook the effort when a working system was already in place. Yet, benefits of lower operational cost, higher visibility and safety, and decreased maintenance outweighed any initial investment.

KLJ’s Funding Resources served as a liaison and worked diligently with city, county, state, and federal funding sources to assist the City of Baker and Fallon County to acquire the funds needed to successfully complete the project. Additional funding was successfully obtained to complete the entire project as well as retain funding for planned maintenance over the repayment period for borrowed funds. Safety measures were considerably increased and substantial cost savings were generated. The new technology not only produces numerous benefits, it has established Baker Municipal Airport as one of the most advanced and capable airfields in the state.

KLJ’s solution exceeded the client’s expectations by not only increasing the runway length but also upgrading the lighting and navigational aid system. LED technology provides versatile, reliable illumination with a long life expectancy and low power consumption. LED’s average life expectancy is 35,000–50,000 hours or greater, as compared to only 5,000 hours for traditional airfield lighting. The new system has brought constant praise from both new and longtime airport users.

During the project, the airport was closed for less than 30 days and available for full use well in advance of the initially scheduled project end date. Baker Municipal Airport continues to lead the aviation industry as a recognized leader in sustainable energy technologies.

In 2013, Baker Municipal Airport received the Billings Engineers Club, Project of the Year award which is based off of the Club's criteria of displaying outstanding achievement using innovation in engineering design. 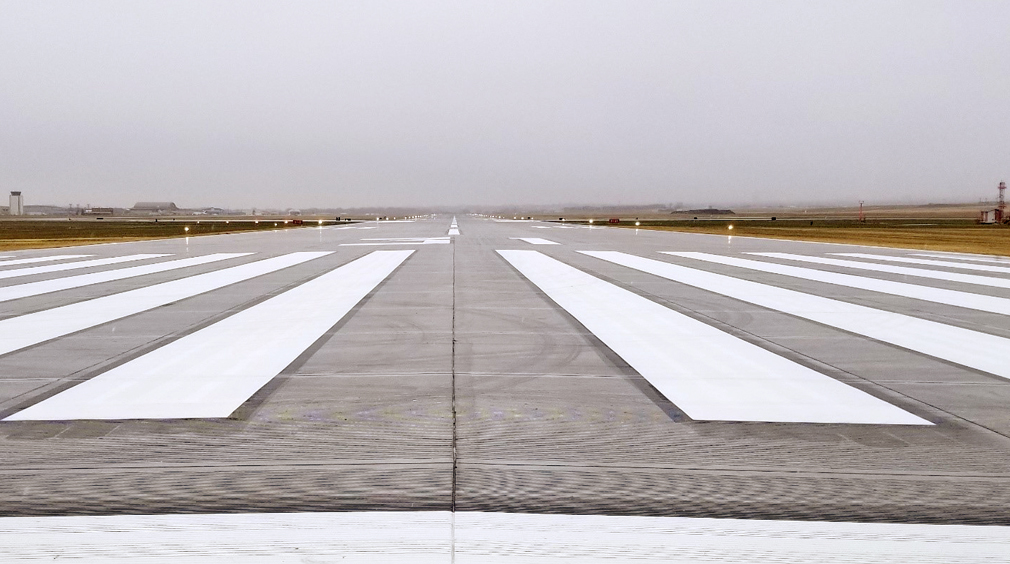