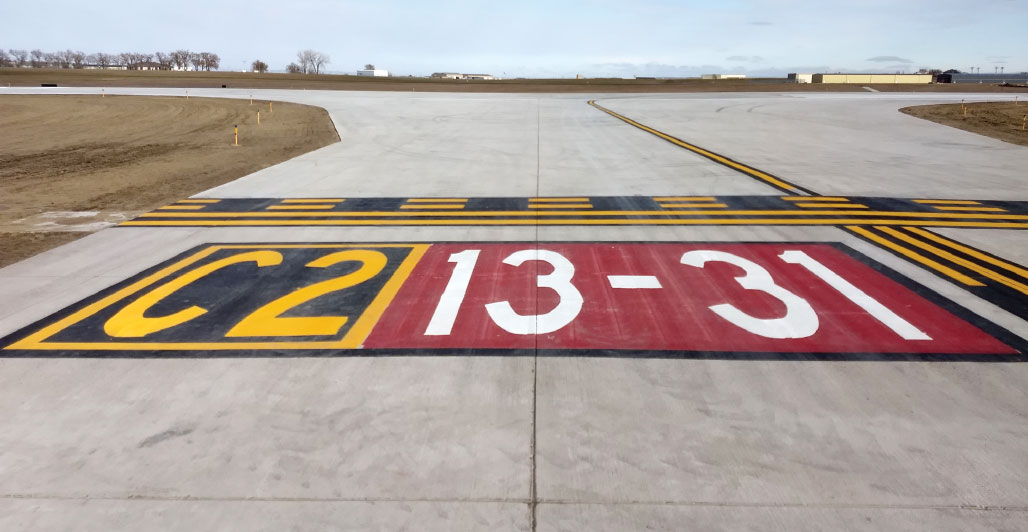 A three-year- construction project recently came to an end when Bismarck Airport’s Runway 13-31 officially opened on October 19. Reconstruction of the 8,794-foot-long primary runway has been in the works since 2011.

KLJ has served as Bismarck Airport’s engineer of record since 2009. During that time, we have provided planning, design, engineering, environmental, and construction administration services for numerous projects, but the reconstruction of Runway 13-31 is the largest airport project the City of Bismarck has undertaken to date. The pre-existing runway was 60-years-old in some parts and started to show significant signs of primary and secondary cracking on longitudinal paving joints, as well as differential movement. In 2014, KLJ developed a plan for a total runway replacement.

Runway reconstruction consisted of removing the old pavement, grading the site, and pouring the material for the new five-layer, 59-inch runway. Concrete pavement was used for the new runway in lieu of asphalt to reduce the need for future maintenance. The project was conducted in three separate phases to allow for continuous airport operations for the duration of the project, as well as maximize available federal funding for the project.

Bismarck Airport is served by five airlines with non-stop service to seven destinations. The airport supports passenger service, business, and recreational aviation, scheduled and on-demand air cargo services, air ambulance service, flight training, aircraft maintenance, military aviation, and North Dakota Army National Guard air operations. It is estimated that there will be more than 280,000 enplanements at the Bismarck Airport in 2019, and that number is expected to increase to more than 446,000 by 2035. The recently-completed primary Runway 13-31 will contribute to continued successful operations, which have a significant economic impact on the City of Bismarck as well as central North Dakota.