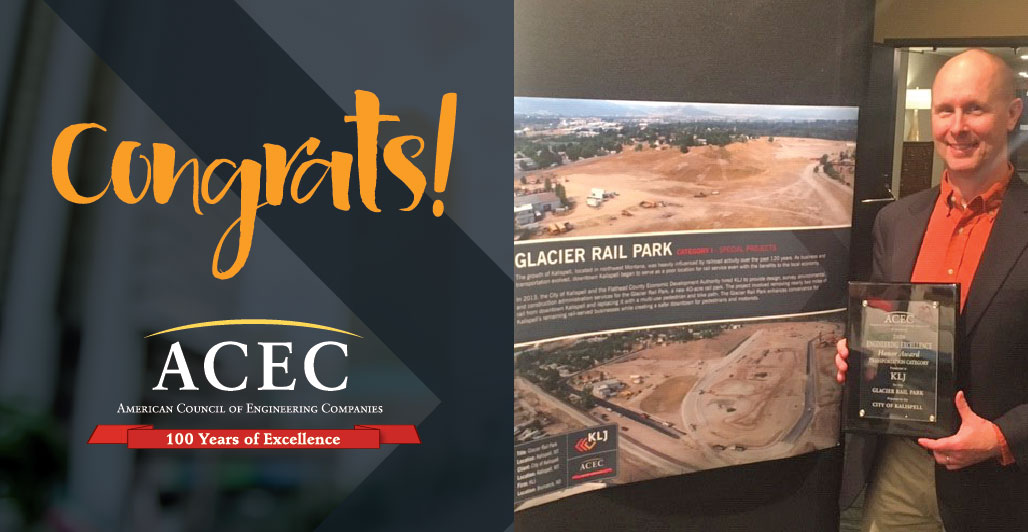 KLJ is proud to announce that our team has been awarded an American Council of Engineering Companies of Montana (ACEC/MT) award for work performed on the Glacier Rail Park in Kalispell. Each project is rated on uniqueness and/or innovative application of new or existing techniques; future value to the engineering profession and perception by the public; social, economic, and sustainable development considerations; complexity; and successful fulfillment of client/owner’s needs, including schedule and budget.

In 2013, the City of Kalispell and the Flathead County Economic Development Authority hired KLJ to provide design, survey, environmental, and construction administration services for the Glacier Rail Park, a new 40-acre rail park. The project also involved removing nearly two miles of rail from downtown Kalispell and replacing it with a multi-use pedestrian and bike path. The Glacier Rail Park enhances convenience for Kalispell’s remaining rail-served businesses while making transportation downtown safer for pedestrians and motorists.

Glacier Rail Park received the award for Category H: Transportation. The growth of Kalispell, MT was heavily influenced by railroad activity over the past 120 years. As business and transportation have evolved over the years, downtown Kalispell served as a poor location for rail service even though it still benefits the local economy.