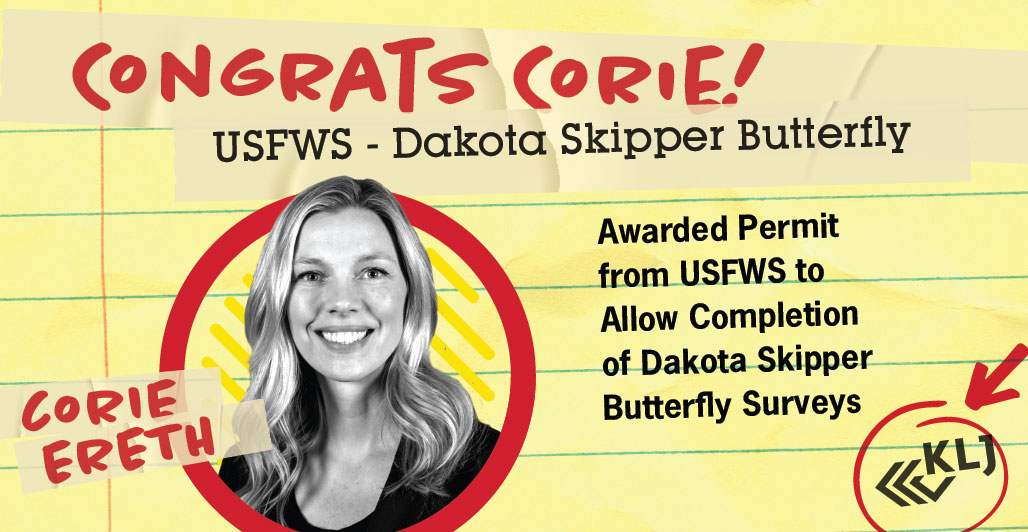 KLJ is proud to announce that Corie Ereth, Senior Environmental Planner, has received a permit from the United States Fish and Wildlife Service (USFWS) that allows her to complete Dakota skipper butterfly presence/absence surveys. Dakota skippers are federally protected under the Endangered Species Act (ESA). Corie will be one of only a handful of people completing this important work across the Midwest. Over the past few years, she went the extra mile by shadowing permitted surveyors during the brief annual Dakota skipper flight period to gain valuable field experience.

Corie is an expert in environmental conservation and environmental planning. She has worked in coordination with private landowners, local, state, federal, and Tribal agencies. Corie is proficient in plant and ecological site identification and biological and botanical surveys. Soon after the Dakota skipper was listed as a threatened species, she collaborated with the Bureau of Land Management (BLM) and the US Fish and Wildlife Service to develop a botanical survey method for identifying potential Dakota skipper habitat. Corie continues to work with federal agencies and industry, in an effort to protect the Dakota skipper and its habitat, understand its current distribution, and provide consultation to clients on ways to move their projects toward development.