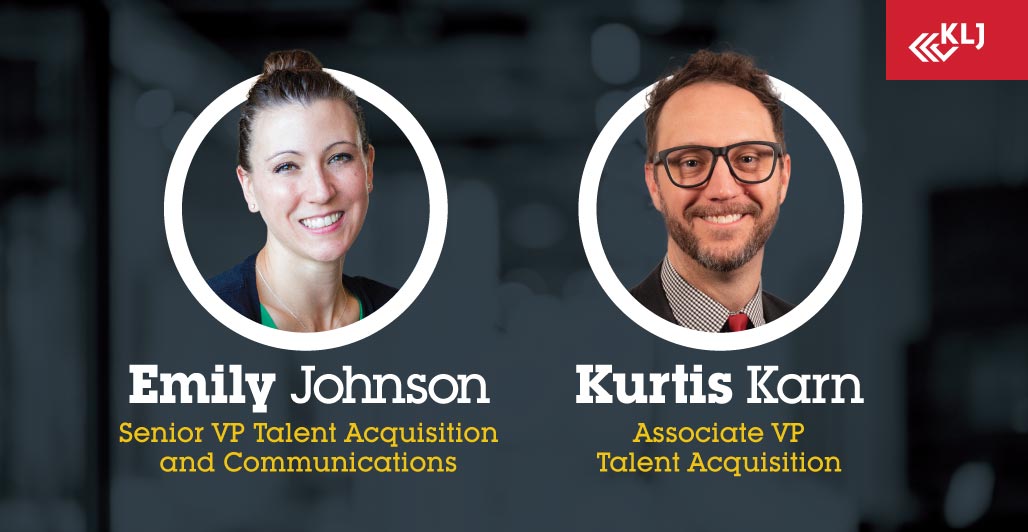 KLJ is pleased to announce the promotion of Emily Johnson to senior vice president of the company’s newly formed talent acquisition and communications department.

Johnson, who has worked for the company since 2010, has held various leadership roles throughout her tenure. Most recently, she served as vice president of KLJ’s branding and communications department, where she oversaw KLJ’s brand, including the company’s marketing and communications efforts, proposal development, and public engagement. Johnson will continue to oversee these efforts from a high level with a concentrated focus on building alignment with the company’s talent acquisition initiatives, the overall brand, and culture.

“A heightened focus on talent acquisition will help support KLJ's continued growth. Emily will work to align the brand with a culture that focuses on safety, inclusivity, continual learning, and celebrating the performance of our employees-owners,” said CEO, Eric Michel.

The Company is also welcoming Kurtis Karn to their talent acquisition team as an associate VP. “His impressive track record for recruiting and retaining talent, made him a great fit for this role,” said Michel. Karn who most recently served as the director of talent acquisition for a regional hospitality focused firm, will work alongside Johnson to identify and retain the people that best fit with the company’s culture and the clients’ expectations.

Johnson earned her MBA and a bachelor’s degree in both business administration and English with an emphasis in Human Resources, from the University of Mary in Bismarck. She recently earned her Talent Acquisition Specialty Certification from Society for Human Resource Management (SHRM), a professional human resources membership, of which she is a member. Johnson is also a member of the Society for Marketing Professional Services (SMPS).

Karn, earned an MBA in human resources from the University of Mary in and a bachelor’s degree in business administration and communications with a minor in Information Technology from the University of Jamestown. He has his SHRM-CP and PHR certifications and is also a national member of the Society for Human Resource Management and Fargo Moorhead Human Resources Association.