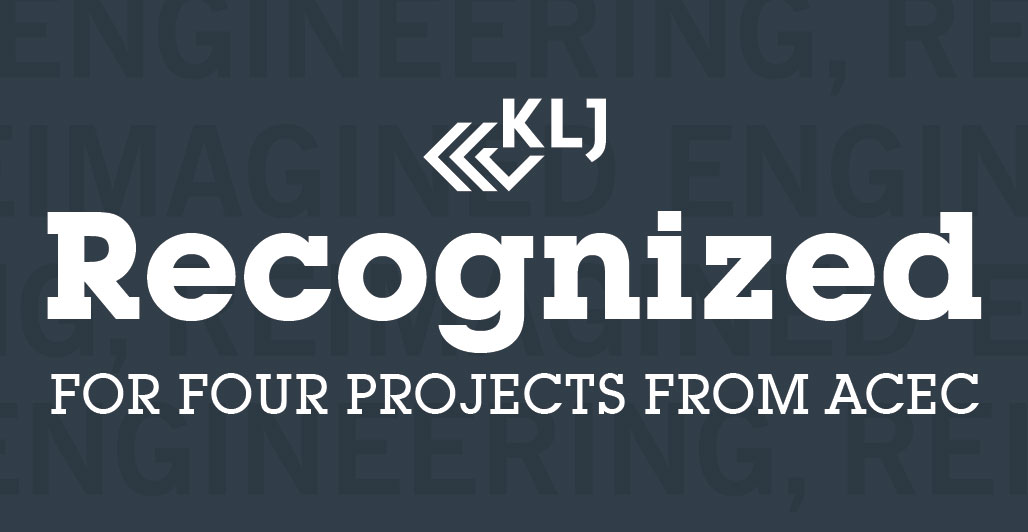 With each project earning a National Recognition Award, they were among 203 entries into the 2020 Engineering Excellence Award competition which focuses on projects with uniqueness and originality, technical innovation, social and economic value, and generating excitement for the engineering profession.

In 2013, the City of Kalispell and the Flathead County Economic Development Authority hired KLJ to provide design, survey, environmental, and construction administration services for the Glacier Rail Park, a new 40-acre rail park. The project also involved removing nearly two miles of rail from downtown Kalispell and replacing it with a multi-use pedestrian and bike path. The Glacier Rail Park enhances convenience for Kalispell’s remaining rail-served businesses while making transportation downtown safer for pedestrians and motorists.

KLJ, together with the North Dakota Department of Transportation and 15 other state and federal agencies, worked to provided improvements to the Pembina-Emerson Port of Entry. The improvements to this fifth largest crossing between Canada and the U.S. included reduced wait times, addition of crossing lanes, and Intelligent Transportation System technology to direct motorists into their proper lanes. Other features include enhanced pedestrian accommodations, outbound inspection and commercial vehicle parking areas, a Duty-Free exchange site, and enhanced access control.

KLJ was selected to complete the environmental review process for the US Highway 85 project, in western North Dakota, which included the preparation for the Environmental Impact Statement (EIS) and Record of Decision (ROD). KLJ also considered comprehensive alternatives, complex preliminary design, extensive public and agency involvement, and numerous field studies for the entire 62-mile corridor. The goal of the project was to maintain and follow the existing alignment, using the current infrastructure to minimize potential impacts on the environment, socioeconomic, and human-made resources. KLJ expediently delivered a signed ROD, allowing the North Dakota Department of Transportation to begin construction on this regionally significant project in 2019.

KLJ completed the TH 149 project in 2018. Our project team transformed a 6.5-mile stretch of the corridor by implementing a Complete Streets approach, along with an upgraded pre-cast concrete drainage system with ADA-compliant grates and gutters, to enhance safety and mobility for all users. TH 149 spans through urban, suburban, and rural sections of three cities and connects to St. Paul’s High Bridge. KLJ supported Minnesota Department of Transportation’s public engagement and stakeholder coordination efforts and facilitated utility relocation for 11 of 16 impacted utilities. The downtown portion of the corridor was designed to accommodate larger vehicles for public transit. KLJ employed a variable mill design and replaced a total of 130 ramps, 21,000 feet of curb and gutter, and 10,000 square yards of sidewalk to achieve a Complete Streets approach.